Avoiding confusion between biodegradable and compostable

Biodegradable and compostable can be confusing words. Technically, both words define biological processes but these concepts have often been misused in the field of marketing, leading to confusion. It is necessary to certify that any new products are compostable following standardized testing methods and identifying them with well-recognized logos promoted by several well-positioned entities.

In recent years and mainly in the packaging sector, there has been a rising trend in replacing traditional plastics such as polyethylene and polypropylene by biodegradable materials in order to reduce the generation of packaging waste. With this regard, some bioplastics and cellulosic materials can be used.

Bioplastics encompasses a whole family of materials which differ from conventional plastics insofar as that they are biobased, biodegradable, or both (Figure 1 – Production, consumption and end-of-life of biodegradable polymers from renewable resources via composting)

Biobased means that the material or product is (partly) derived from renewable resources. According to their origin, biobased polymers can be grouped into three classes , : (i) Polymers extracted directly from biomass, (ii) polymers synthesized from monomers obtained from biomass, and (iii) polymers produced by microorganisms.

The first type of biopolymers includes those based on polysaccharides (starch, cellulose…), and proteins (wheat gluten, soy protein, gelatin…). The second group of biopolymers covers a wide range of materials, such as poly (lactic acid) (PLA), produced from lactic acid obtained by fermentation of, for example, sugar cane; biopolyethylene (BioPE), from the polymerization of ethylene produced from bioethanol; and bio-polyurethanes, incorporating polyols of vegetable origin. The third type refers to biopolymers that are produced directly by microorganisms, such as polyhydroxyalkanoates (PHA) . Of all of them only some are biodegradable.

The term biodegradable refers to a chemical process during which microorganisms that are available in the environment convert materials into natural substances such as water, carbon dioxide and biomass. There are diverse environments for biodegradation of materials, such as soil, water, marine environment, digester plants, household composting units, and industrial composting facilities.

Regarding packaging waste, composting appears to be a feasible solution for its recovery reducing the need for final disposal of used packaging of those materials that meet specific requirements. To be considered as compostable a material or product have to undergo degradation by biological processes during composting to yield carbon dioxide, water, inorganic compounds, and biomass at a rate consistent with other known compostable materials, and must not leave visually distinguishable or toxic residues.

Biodegradable and compostable can be confusing words. Technically, both words define biological processes but these concepts have often been misused in the field of marketing, leading to confusion. Following their definition, any product can be biodegradable, but what really matters is the time frame in which a material is biodegraded and in which environment. Compostable thus restricts the term fixing both aspects, and deals with other important aspects such as material characteristics, disintegration degree, and quality of the resulting compost.

Many unsubstantiated claims to biodegradability and compostability were made in the past as a consequence of the lack of well-identified environmental requirements, and the inexistence of well-established testing methods. However, since the year 2000 there are standard methodologies to evaluate the suitability of a material for its organic recovery by composting. EN 13432  is one of the most recognized standard norms that defines the procedure and the criteria to determine the composability of a material. Logos (Figure 2 – Compostability logos given by VINÇOTTE, EUROPEAN BIOPLASTICS and DIN-CERTCO: OK COMPOST, Seedling and DIN-CERTCO – Industrial Compostable, respectively) and certificates issued by several certification bodies such as DIN CERTCO and VINÇOTTE in Europe, BPI in the USA, and JBPA in Japan, allow demonstrating the conformity of final products, materials, intermediates, and additives with the specified criteria in the standard compostability norms. Moreover, false and misleading environmental claims are being pursued by diverse organizations, such as Federal Trade Commission in the USA, which imposed recently a $450,000 civil penalty.

In order to obtain the different compostability logos, the testing must be conducted in laboratories that are recognized by the certification bodies.

The different tests to be performed in order to determine if a material, intermediate, additive or product can be recovered through composting according to EN 134326 (and if applicable, in connection with ASTM D 6400, ISO 18606, ISO 17088, EN 14995 ) are compiled in the following table and described in the next subsections. 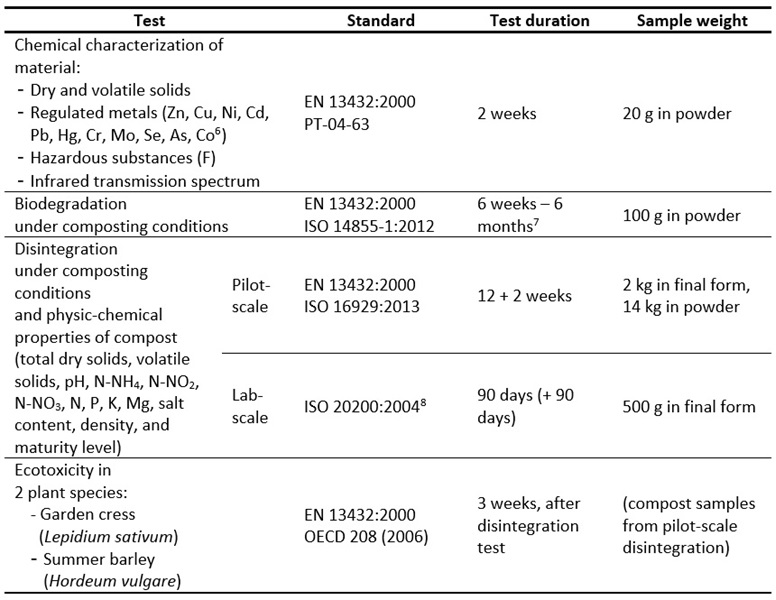 Each product shall be identified and characterized including at least:
1) Information and identification of the constituents,
2) presence of regulated metals (Zn, Cu, Ni, Cd, Pb, Hg, Cr, Mo, Se, As, Co13) and other hazardous substances to the environment (F), and
3) content in total dry and volatile solids.

Biodegradability is determined by measuring the carbon dioxide produced by the sample under controlled composting conditions following ISO 14855-1:2012. For this, the sample is mixed with compost and placed in bioreactors at 58 C under continuous flow of humidified air. At the exit the CO2 concentration is measured and related to the theoretical amount that could be produced regarding the carbon content of the sample.

The biodegradability should be determined for the whole material and individually for the constituents present at levels between 1 and 10%. 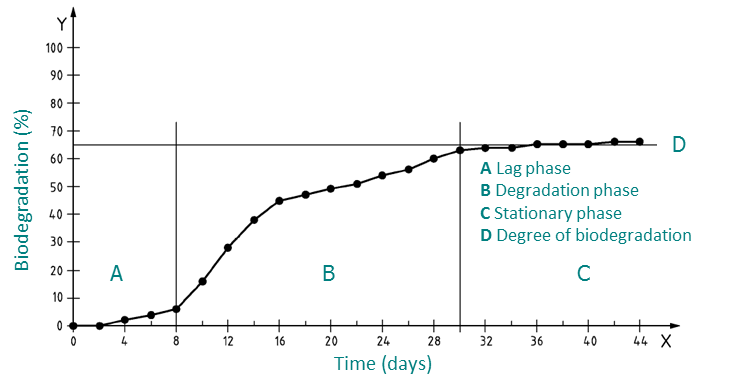 Disintegration is evaluated at pilot-scale by simulating a real composting environment following ISO 16929:2013 . In this case, samples in their final form ,   are mixed with fresh artificial bioresidue. Oxygen concentration, temperature and humidity are regularly controlled. After 12 weeks, the resulting composts are sieved and the remaining amount of material in pieces > 2 mm, if any, is determined. Photographs are taken in order to follow the physical disappearance of materials (Figure 4 – Disintegration of a sample under simulated composting conditions in a pilot-scale test).

Pass level to be considered disintegrable under composting conditions is > 90% in ≤ 2 mm. If this pass level is achieved a physico-chemical characterization of resulting composts (blank and with sample) is conducted in order to determine that the quality of the compost is not affected. Parameters such as: total dry solids, volatile solids, pH, ammonium nitrogen (N-NH4), nitrite nitrogen (N-NO2), nitrate nitrogen (N-NO3), total nitrogen (N), phosphorus (P), potassium (K), magnesium (Mg), salt content, density, and maturity level (Rottegrad) are determined.

Ecotoxicity of the resulting compost is evaluated in plants following OECD 208 (2006) . For this purpose, material in powder is added to the bioreactor with fresh bioresidue following the same procedure than in the disintegration test . A comparison is made with the compost resulting from blank bioreactors and bioreactors containing the material tested with regards to plant seedling emergence and growth. Both parameters should be higher than 90% with respect to the blank compost to pass the test. Two different species are evaluated such as garden cress (Lepidium sativum) and summer barley (Hordeum vulgare).

Finally, in order to fulfil the requirements stated in the European Parliament and Council Directive 94/62/EC on packaging and packaging waste, an end-of-life option has to be selected before placing a packaging product in the market. Composting is one of the diverse recovery options available to reduce and recycle packaging waste. However, because of the increasing number of new compostable materials in the market and in development, it is necessary to certify that these new products are compostable following standardized testing methods and identifying them with well-recognized logos promoted by several well-positioned entities. This will also help final consumers to properly manage packaging when it achieves its end-of-life and becomes waste.